ARB has taken note of all lessons learnt from its original Intensity LED light range to come up with the upgraded and very clever Intensity Solis.

WHETHER you’re a ‘fresh out the gate’ 4x4 beginner or an experienced overlander, when listing your modification wish list one of the initial items is usually the brightest auxiliary lighting you can bolt on.

Let’s face it the OEM lighting offered by vehicle manufacturers today is a little on the underwhelming side, given the speeds achievable by both 4x4s and our intrepid Australian fauna. Being able to cast your vision well ahead can mean the difference between getting to your after-dark destination, or wearing Sonny’s best mate deep into the grille.

ARB has more than 45 years of manufacturing 4x4-equipment experience under its belt, and after releasing the original Intensity LED light range, listened to customer feedback to develop lights with better design and operation. The ability to alter the output of the lights rated highly with customers, but why would you want to bring down the punch of your spotties? 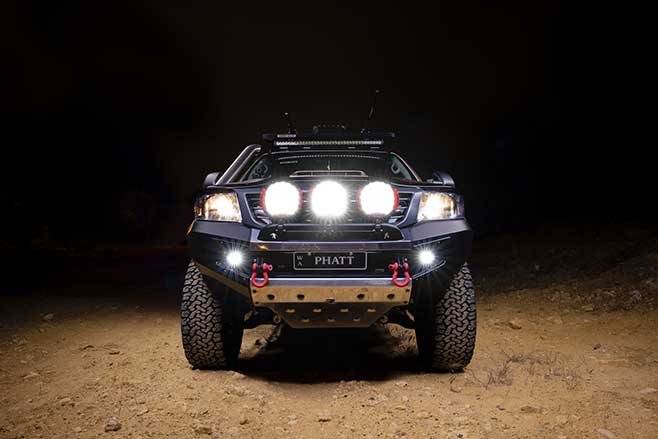 Well, some of that feedback ARB received was its lights were just too bright when encountering reflective road signs. The bounce-back in some cases blinding the driver, completely defeating the purpose of the spotties in the first place. Sure you could take the spotlights offline, but the real-time return of the driver’s night vision wouldn’t be ideal.

After using the lights for the last month, I’ve found the sweet spot of power for urban driving midships at level 3. Having the availability of even more lighting power up to the maximum of level 5 was fantastic once outside city limits. More to the point, using just two of the three Solis lights mounted across the front of the Hilux at this midpoint in power still made my original triplet of eBay LED spotties look very underfed.

ARB offers the Solis in separate Flood and Spot variants, but you’d be flat-out picking the difference visually when mounted side-by-side. While the techs at ARB were designing the layout of the Solis they kept items like the main board electronics, LED positions, and the cast aluminium bodies identical between the two.

The only variation are the now one-piece reflectors. This kept manufacturing costs down, as most LED lights use identically shaped single cups for each LED which also reduces the usable space inside a traditional circular housing. ARB flipped the script and designed oddball shapes for the Solis cups, utilising more of the available housing area while cramming 36 LEDs into roughly the same area as the original 32 LED Intensity design.

The Solis pulls 165W of power using a combination of 30 x 4W and 6 x 10W German-made Osram LEDs. However the hexagonal layout of the more powerful 10W LEDs needed to be as close to the centre of the light as possible, with the smaller wattage LEDs positioned around them (and one inside the hexagon) to help feather the more pronounced 10W LED light edge.

The results being an 11° spread for the Flood using segmented/graduated cup faces, while the more focused 6° spread of the Spot is achieved via smooth surfaced cup faces. Given the Flood reflector refracts the given light the output drops slightly to 8333 lumens, while the Spot punches out to 9546 lumens. 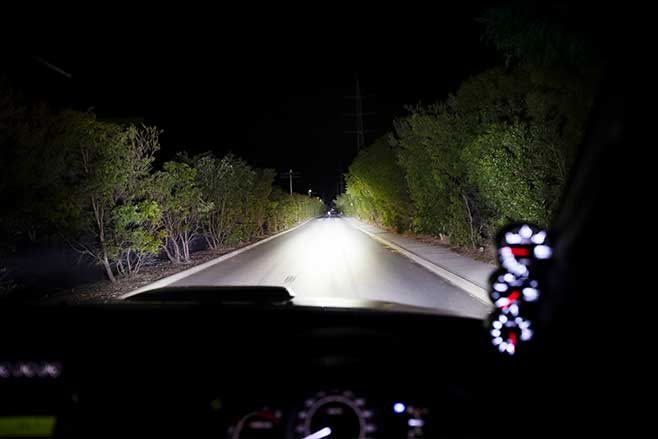 If lux figures matter more to you, however, then the Solis has got you covered there too. Using two Spots (obviously) ARB was able to record the standard 1-lux measurement at an impressive 1462m away from the lights. Using just the one Spot the Solis was still able to shoot 1-lux of light just over a kilometer away at 1032m. Changing to one Flood drops this figure to a still respectable 729m.

All fantastic numbers on paper and they give engineers valuable improvement percentages and buyers something to go on, but in the real world the quality of light is what’s going to prove most effective. The case in point being the ability of the reflectors to feather the light after projecting it well ahead of the driver. Get the tuning of this wrong and all the driver will focus on is a bouncing ball of focused light up ahead. Not ideal when you’re supposed to be looking out for turbo-charged marsupials or road hazards.

Designing the cups of the Solis reflectors into irregular shapes the ARB engineers were able to redirect some of the focused light giving the gradual fall-off needed to lessen the intensity of the central light. There’s still some intensity towards the centre of the beam, but the reduction of a hard edge decreases eye fatigue considerably.

GETTING THE WIRING RIGHT

WITH the ability of most wannabe auto electricians leaving their under-bonnet cabling resembling a Balinese power pole, it’s no wonder ARB went ahead and designed its own loom for the Solis. This was more a necessity though, as the loom also needed to handle the new dimming function.

A neat feature of the cabin-mounted dimmer being it doubles as the On/Off switch by pushing the ARB symbol, lighting the logo up in red when disabled and negating the need to wire in a separate dash-mounted power switch. ARB’s loom also includes all prewired fuse saddles and fuses, ring-terminated battery fittings, and Plug-and-Play intercept harnesses for H4 and HB3/HB4 headlight bulbs. If your 4x4 has negatively switched headlamps (like the Hilux) there’s detailed instructions on how to fit a switching relay to your Solis loom. You’ll have to grab your own switching relay though.

The loom is rated to handle the amperage drawn by two spotlights, and is insulated inside heavy-duty conduit. The final link between loom and light is via a waterproof Deutsch-style connector for each light. It is not recommended splicing into the loom to run a third or fourth light, however. The reason being the Solis controller uses pulse-width modulation (PWM) to tell the electronics inside the spotlight bodies what level of brightness you’d like them at. The good news is ARB is working on a loom that will allow the use of the one dimmer to control more than two spotlights, but in the meantime you’ll have to use one dimmer plus loom for every two lights.

WHEN YOU’RE ON TO A GOOD THING

BEING at the front edge of your 4x4 it goes without saying that a set of strong lenses would give you peace-of-mind should anything fly up and hit them. ARB got it right the first time fitting rock-hard polycarbonate lenses to its original Intensity range and have stuck with that again for the Solis. Further doubling your protection, they come packaged with clear detachable polycarbonate covers too, but there’s a choice of complete blackout or amber should you wish to change up your look later. 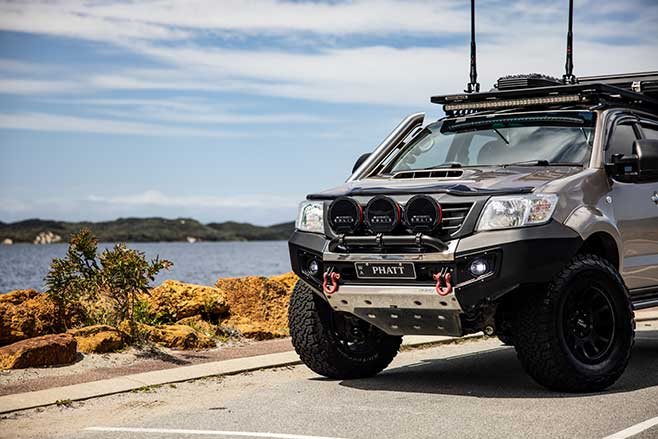 CHAMFERING the bottom of the circular lens shape allowed the engineers to bring the centre of gravity closer to the base of the light. They also placed the bulk of electronics and the heatsink closest to the base too. This naturally reduced the amount of leverage the supported light body has on the bracket, further reducing the vibration that can be seen in the projected light. ARB has also upgraded the brackets to high-pressure formed aluminium, with identical material used for the heatsink and lens ring accents.

An item often overlooked is electrical interference generated by high-power devices. Listening to the radio when using my previous eBay lanterns was never an option, unless I was in the mood for smooth beatless static. Changing over to the Solis lights with their quality circuitry has this static now happily at zero.

WITH so many lighting products on the market it’s a pretty hard ask to come up with something new and innovative, but ARB has done just that.

ARB lists both Solis variants at RRP: $349 each; with the necessary two-light loom coming in at RRP: $89. Protective cover alternatives in Amber or Black are at RRP: $16 each.

With features like dimmer control, clever physical design, incredible power and light quality, customisation, as well as the strong backup support of a longtime Australian company, 4x4 drivers have been given a potent choice.

We are expecting stock of the ARB Solis LED Range in 2021.

Subscribe today to receive info on our latest offers, deals and giveaways!